A Return to Blogging

- August 16, 2012
Wow, almost four months have passed since my last post!  Seems like so much time has passed that even Blogger has changed its interface...  I've definitely been doing a bad job at blogging.  Between work, sitting in traffic several hours a day, trying to exercise, and trying to relax after a long day, I really don't have time for much.

I've been thinking about the format of my blogs and what to do with them.  Since I don't blog frequently enough, one option is to recombine them into a single blog again.  I suppose I could also keep them separate and find a way to connect them into a bigger site at some point.  My blogs will always be works in progress, so expect changes in the future!

Quick life update: Still working the same jobs, living at home, and not having much luck with the Bay Area housing market.  Seriously, who wants to pay $1000/month to live in a room in a house?  Doesn't help than my parents expect me to live at home until I either get married or buy a house. Given my home situation, I wonder if I would have a better life if I did go to medical/law/engineering school.  Then I realize that my doctor friends have debt in the six figure range (and make less than expected after malpractice insurance/taxes/overhead), my lawyer friends are mostly unemployed and in six figure debt , and my engineering friends only make slightly more than I do.  I suppose it's sad times for everyone right now.

The positive thing about all of this is having extra money to do a little traveling.  It's quite addicting and a motivating factor in finding a career that lets me travel all over the place.  I'll talk about my trips at some point.

Well, that's all for now.  I'll also be updating Cheap Social Worker, so please feel free to check that out too!
life news 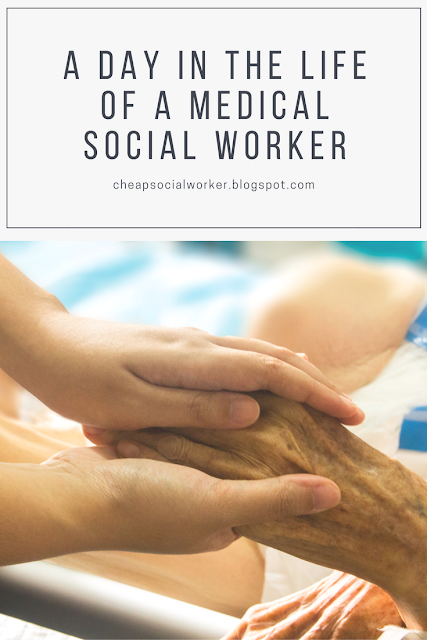 One of the problems of being a medical social worker in a hospital is that my work is so varied that people get confused as to what I actually do! To give you a better idea of my job functions, here's a rundown of a typical day at work. At some point, I may write different versions based on what unit I'm working on and what model of social work the hospital uses. For a comprehensive overview of the medical social work profession, please go here: About Social Services at a Hospital
A Typical Day in the Life of a (not so) Cheap Medical Social Worker

6:20am: Alarm clock goes off. I hit the snooze button.

6:30am: I drag myself out of bed, wash up, throw some clothes on, and slap my makeup on my face.

7:00am: I run out the door and proceed to sit in traffic for the next hour.

8:00am: I arrive at work, clock in, and head to my desk to print out the hospital census. After figuring out who all the new patients are, I go through each one to determine if they need to be "trigge…
Read more