- December 05, 2014
Last November, I had the opportunity to spend glorious three days at Disneyland with my parents and looKIMsopretty! Disneyland holds a special place in my heart since I have many fond childhood (and young adult) memories from vacationing there. Now, my family and I try to go every 1-2 years thanks to my dad's discounted military tickets.

During this trip, I wanted to try as many new foods as possible since I didn't discover the joys of Disney food until recently. While growing up, my folks would pack a rice cooker, Spam, Vienna Sausages, sardines, and precooked meals stored in Tupperware whenever we went to Disneyland. We'd then leave the park during the day and eat as many meals as possible in the hotel to save money. On top of that, I was usually too excited to go on rides to think about food as a kid!

While my parents still pack a rice cooker and various canned meats, we now enjoy more meals in the park along with snacks like churros (my mom's favorite) and turkey legs (my dad's favorite). My personal favorites are Dole Whips, turkey legs, and churros. Here's a rundown of everything I had over the three days I spent at Disneyland/California Adventure: 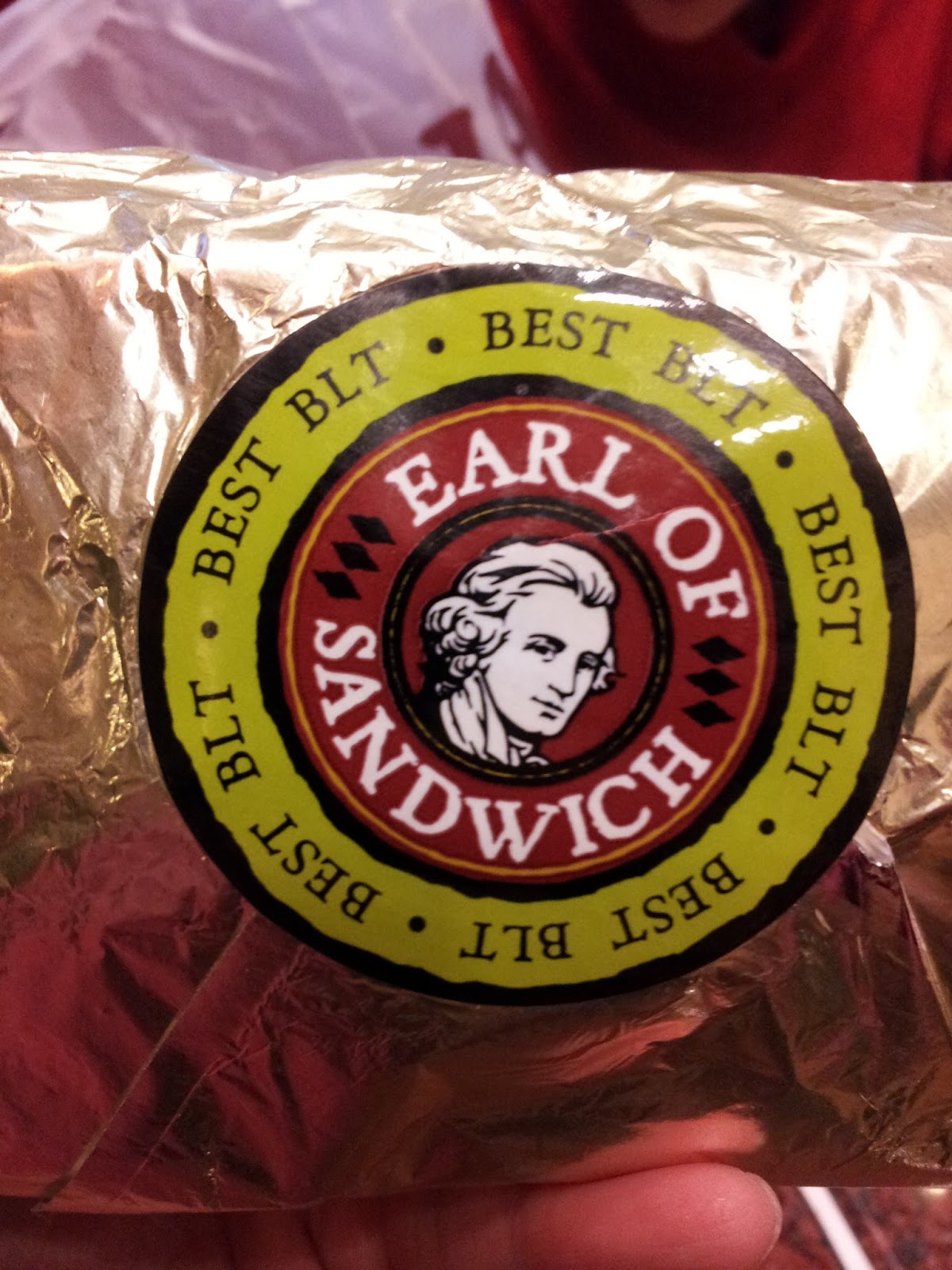 I first discovered Earl of Sandwich while looking for something cheap to eat in Las Vegas. Since then, I've made it a point to go every time I'm there. I was thrilled to find out that they recently opened an Earl of Sandwich in Downtown Disney and stopped by to get my usual Best BLT ($5.99) after checking into my hotel. Unlike the Las Vegas shop, the one in Downtown Disney has much more seating to accommodate families wanting an affordable meal.

Breakfast: NOTHING!
I was in a hurry to get to the park, so I pretty much skipped breakfast. PLEASE DO NOT DO THIS!

For lunch, we headed to Corn Dog Castle! I ordered a Hot-Link Corn Dog ($7.99) which came with your choice of chips or apples (regular hot dogs and cheddar cheese sticks are $7.69). The corn dog itself was just how I like them, with a juicy hot-link surrounded by a generous coating of deep fried cornmeal batter. While the corn dog looks huge, note that there is probably more fried batter than hot dog! Definitely a nice, filling meal to make up for skipping breakfast. 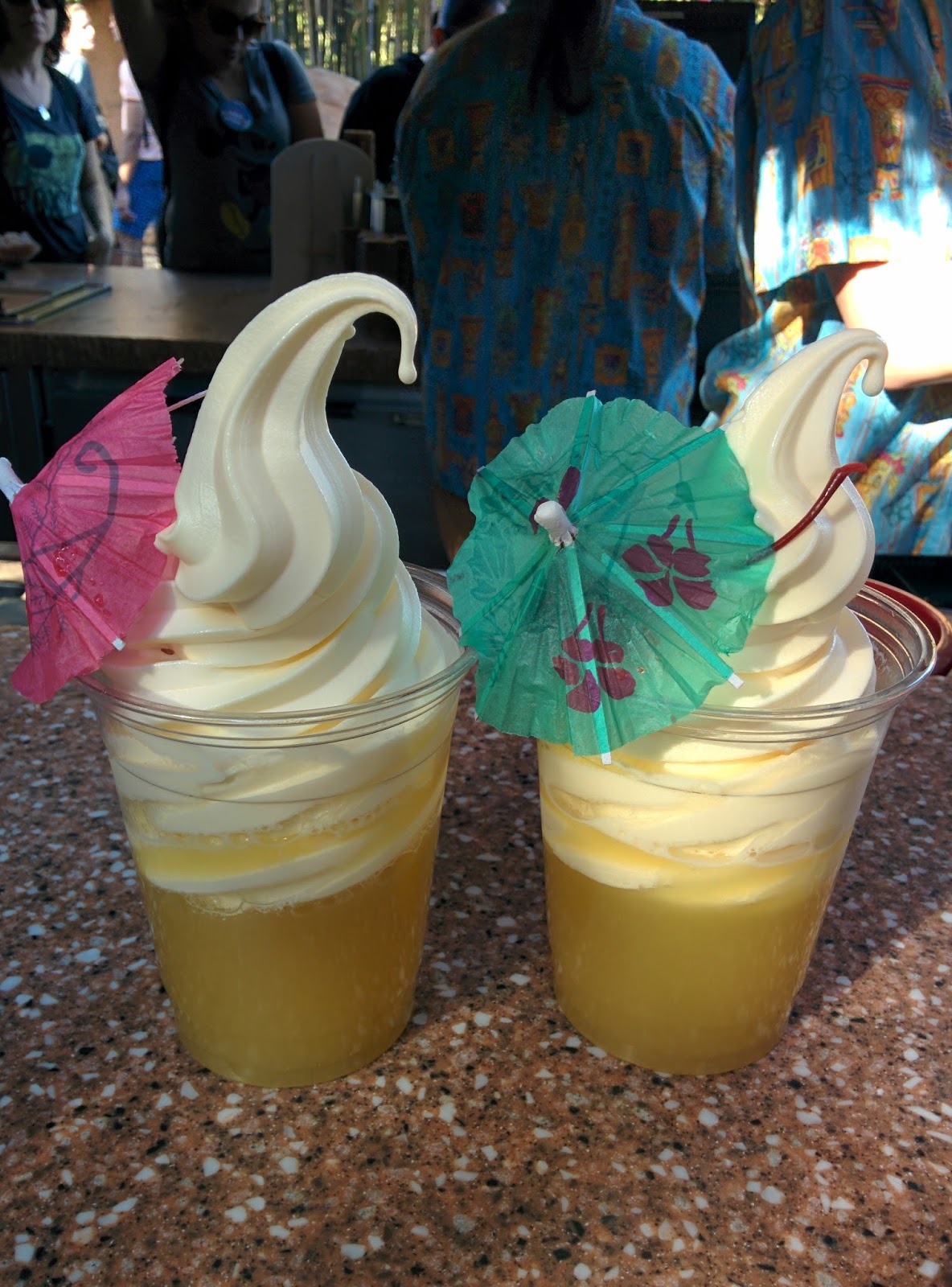 As previously stated, one of my favorite snacks at Disneyland is the Dole Whip Float ($4.79) which is sold outside the Tiki Room. While you can get the pineapple soft serve by itself, I prefer to mix it with pineapple juice for extra flavor and hydration! One tip is to pass the turnstiles into the Tiki Room waiting area, as they have another cashier with typically shorter lines. 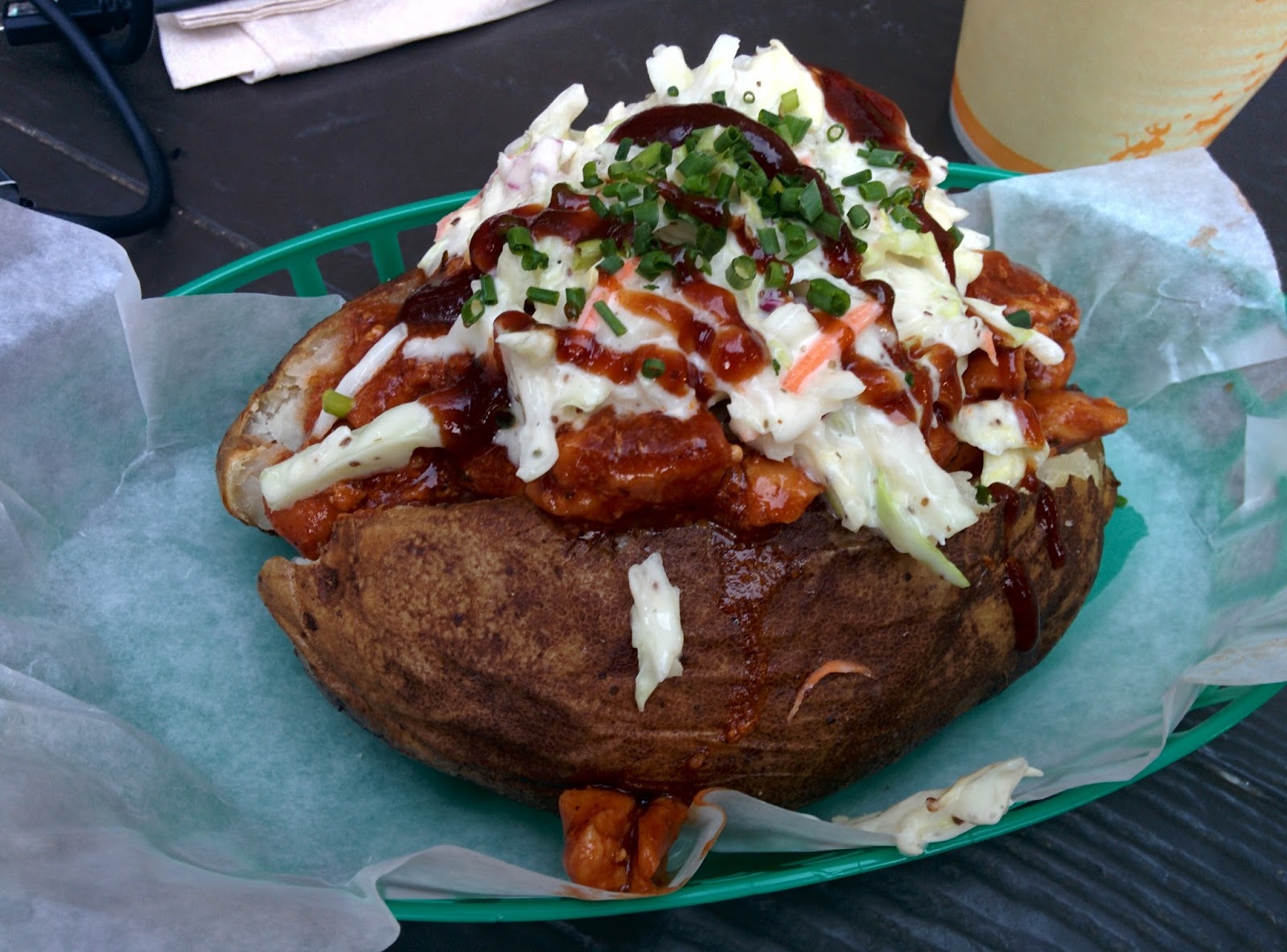 After reading about the BBQ Chicken and Slaw Stuffed Baked Potato on various food blogs, we decided to head to Harbour Galley between New Orleans Square and Critter Country, which is as close as you get to a "hole in the wall" at Disneyland. Let's say that the food blogs were right! Not only do you get a large potato, you also get a GIANT scoop of juicy BBQ chicken topped with coleslaw and sour cream to go with it! For $6.39, this meal is a Disney bargain as it can easily feed two people!

Breakfast: Steamed rice, canned sardines, and tomatoes
Our hotel didn't have continental breakfast and I didn't want to pay for breakfast. It's a lot tastier than it sounds, really! 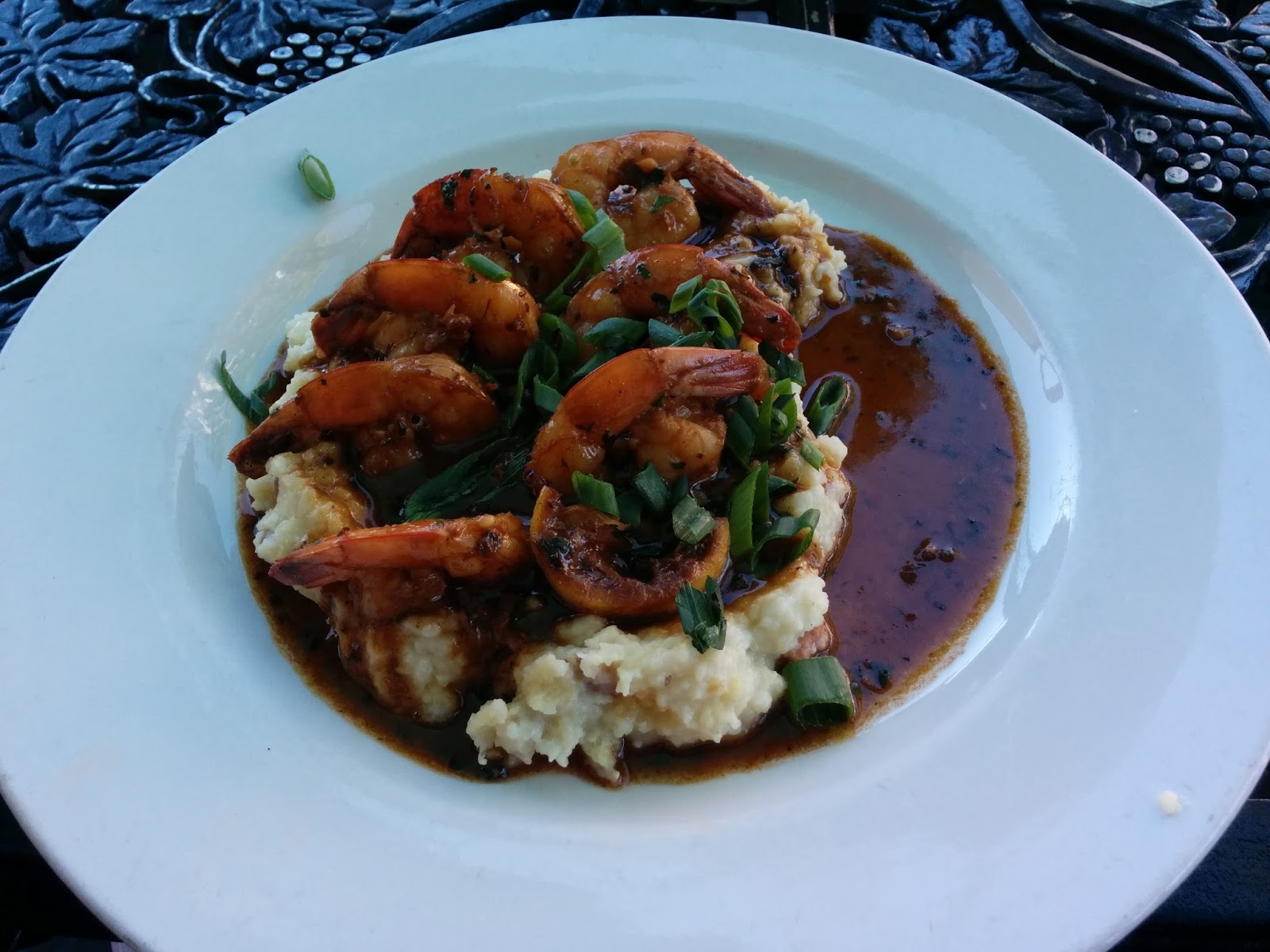 The menu describes this as shrimp with "'New Orleans' barbecue sauce, andouille parmesan grits". Tasty and flavorful, and a small enough portion so I didn't have to box anything. For $17.00, this meal is fairly pricey for the size. Big eaters might want to consider the Po' Boy Sandwich for more value. 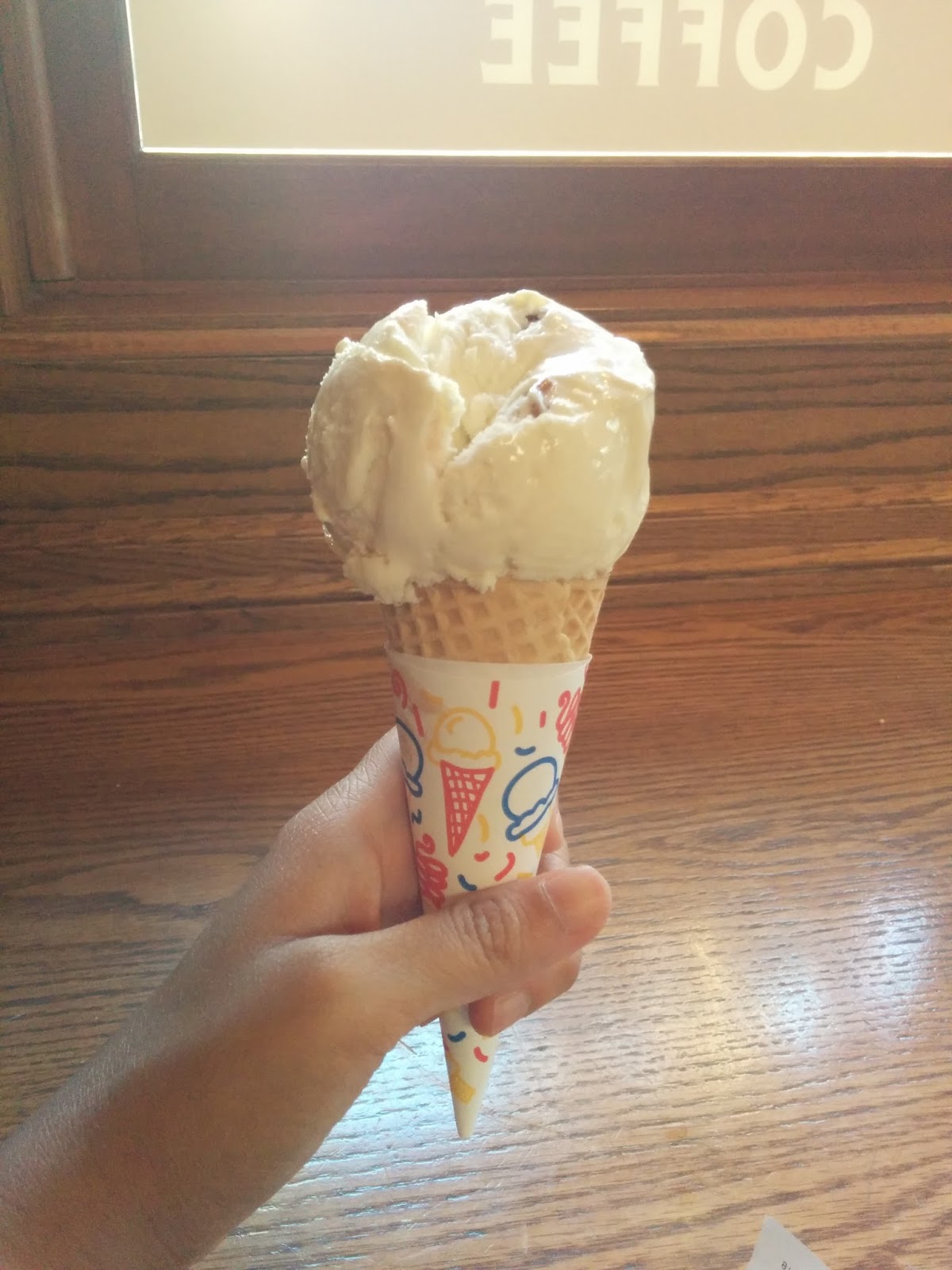 I'm usually not one to get sugar-free food, but I was in the mood for something different. Surprisingly, this ice cream did not taste sugar-free at all. However, at $4.69 for a single scoop you'd be better off just going to the grocery store and getting a half gallon of Dreyer's (the brand Disney uses).
Note: If you have kids and their ice cream falls off the cone, bring the empty cone back to the shop for a replacement scoop. Disney likes to keep the kids happy like that. 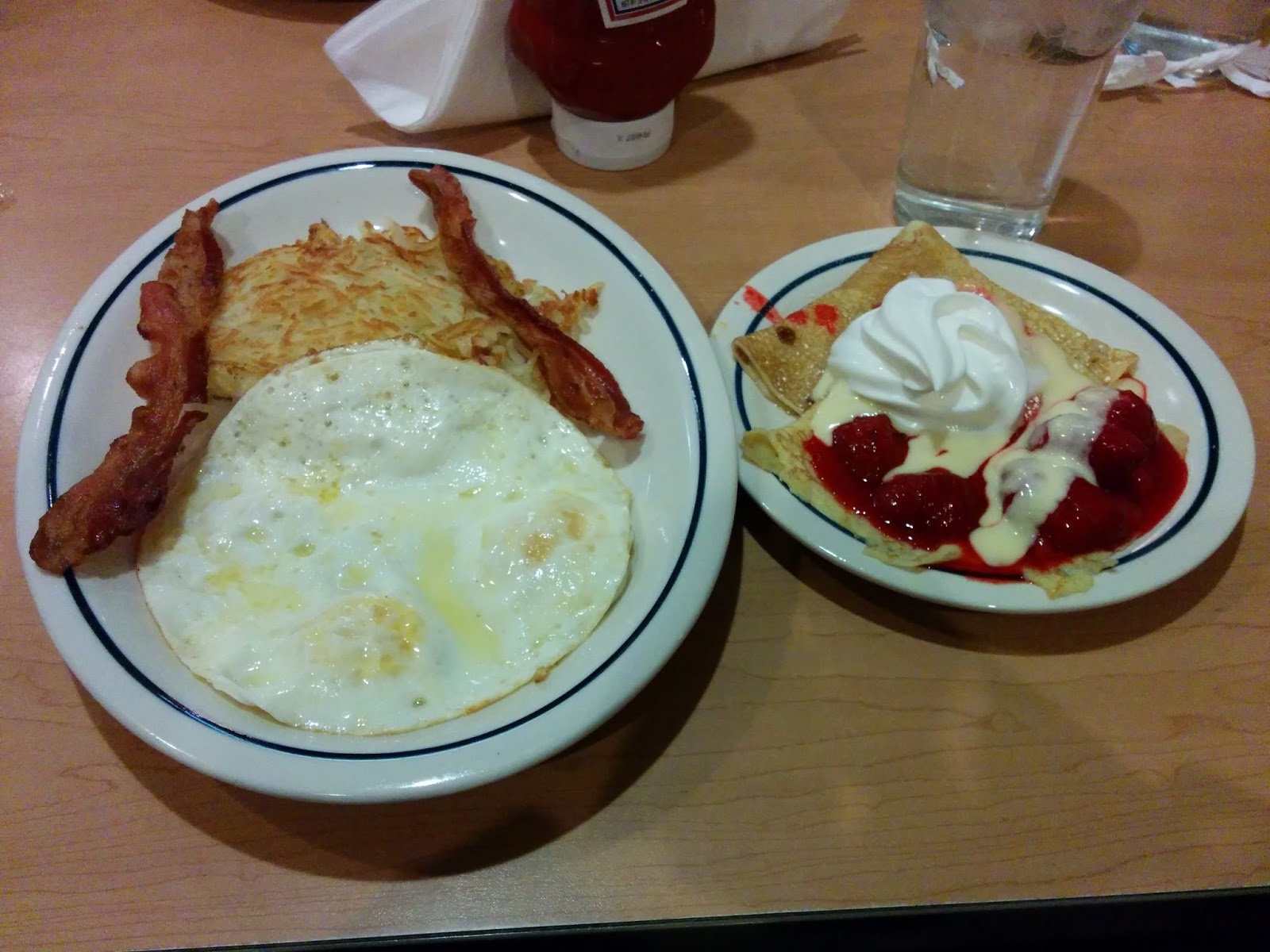 My family and I were hungry and tired of wading through crowds, so we just had dinner at the IHOP next to our hotel. Price-wise, we could have gotten comparable food inside one of the parks, but at least here we didn't have to wait to sit down. One of my fondest memories of Disney as a child was a 1am breakfast at Denny's on Easter Sunday after staying in the park until closing and getting to go on rides without waiting in line. Not a bad way to end the day! 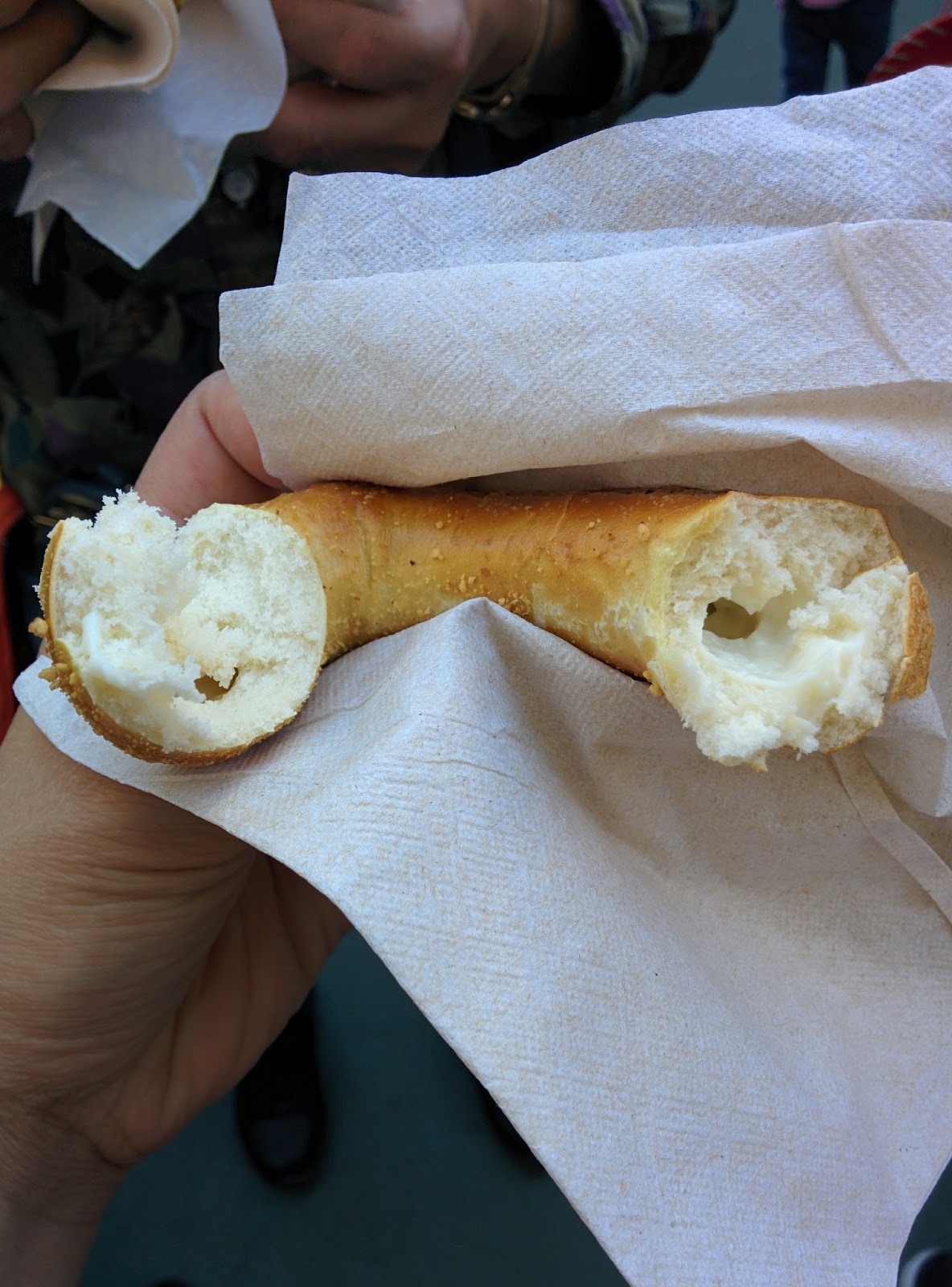 I usually only eat pretzels when my mom buys them and managed to grab a piece of this one. Next time, I might just get my own pretzel because the combination of toasted pretzel with sweet cream cheese was delicious! For $4.75, it's a nice alternative to the churro. 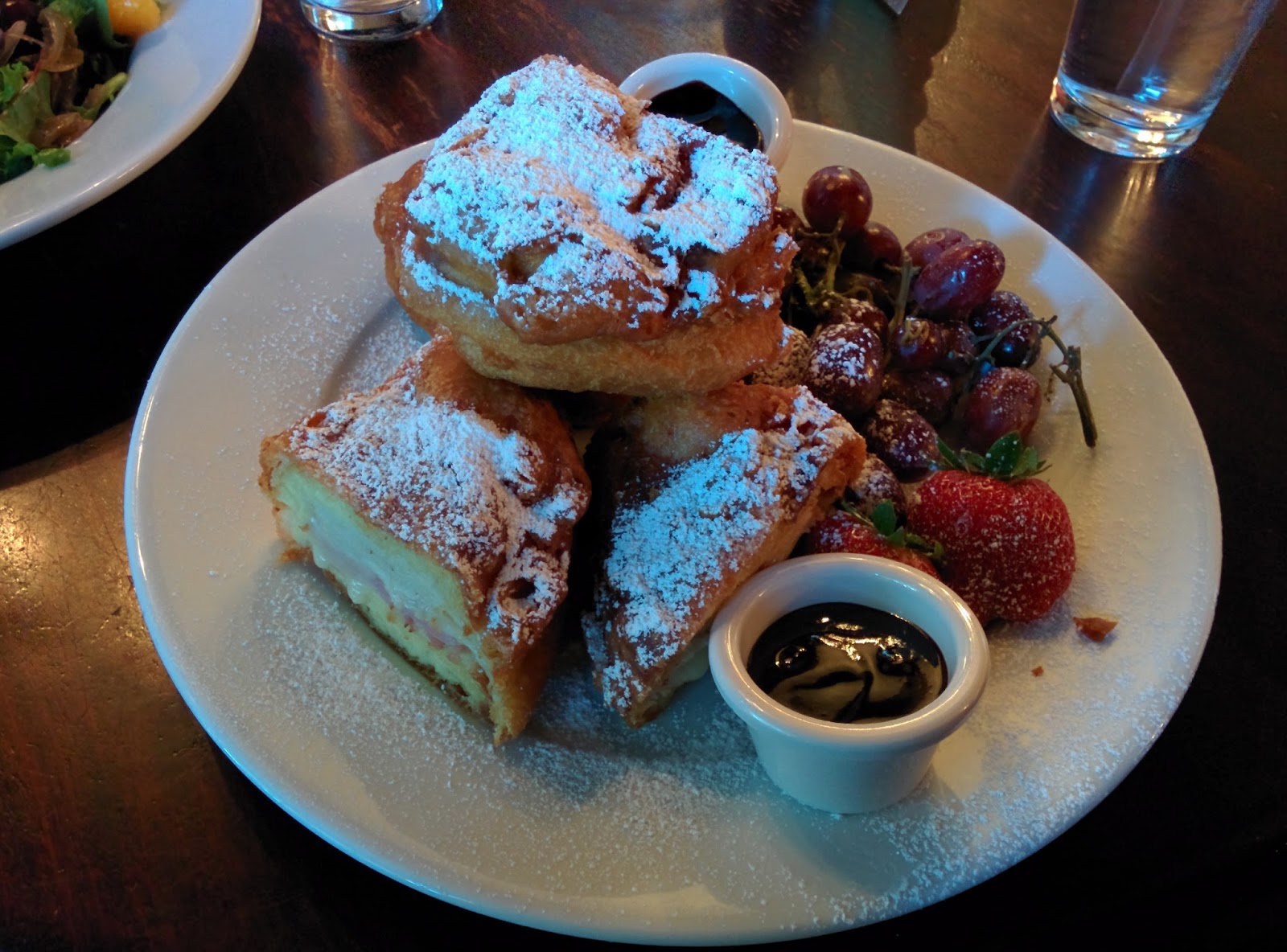 Since I started reading Disney food reviews a few years ago, I've been wanting to try the Monte Cristo Sandwich. Described in the menu as "Sliced Turkey, Ham, and Swiss fried in a light batter and served with Berry Purée dusted with Powdered Sugar", this famous specialty is served at the Blue Bayou ($26.49) and Cafe Orleans ($18.99). There's also a vegetarian version which uses Swiss, mozzarella, and double crème Brie for the same price. 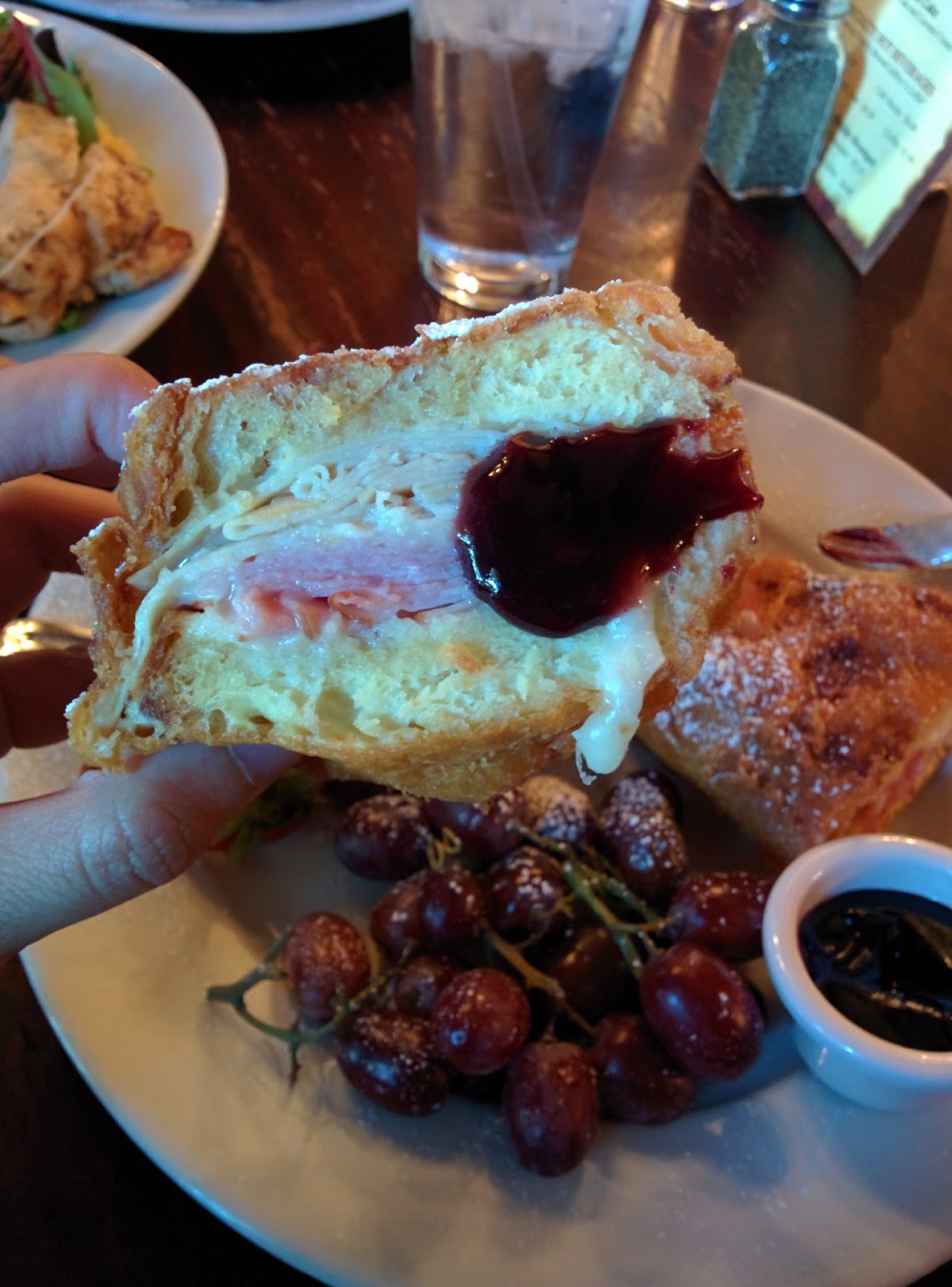 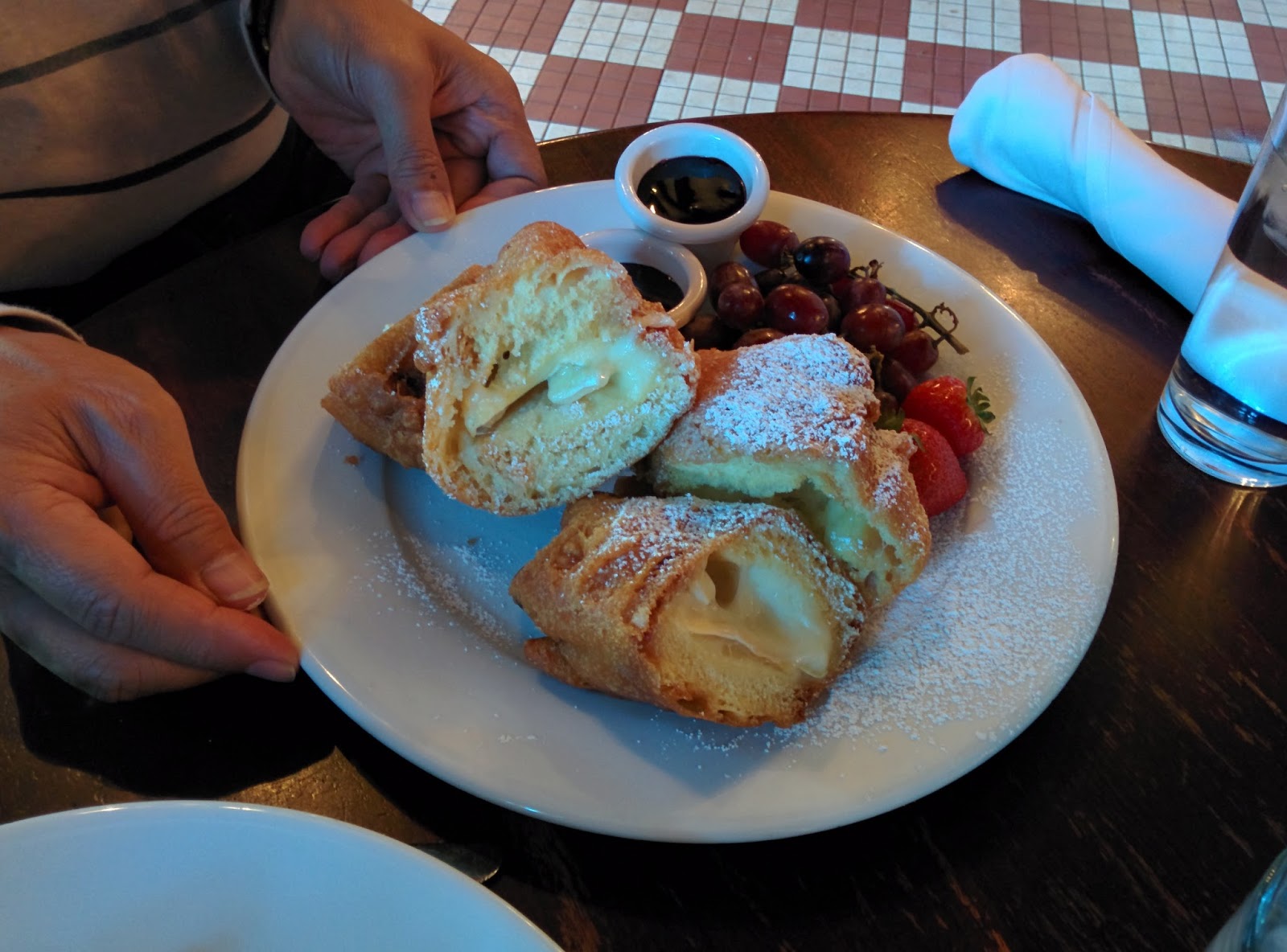 While I'm not sure if I'd ever get the original Monte Cristo again, I'd definitely reorder the vegetarian version. One recommendation I have is to bring a friend, have that person order a soup/appetizer, and split the sandwich as the portions are so huge that I couldn't even finish half! 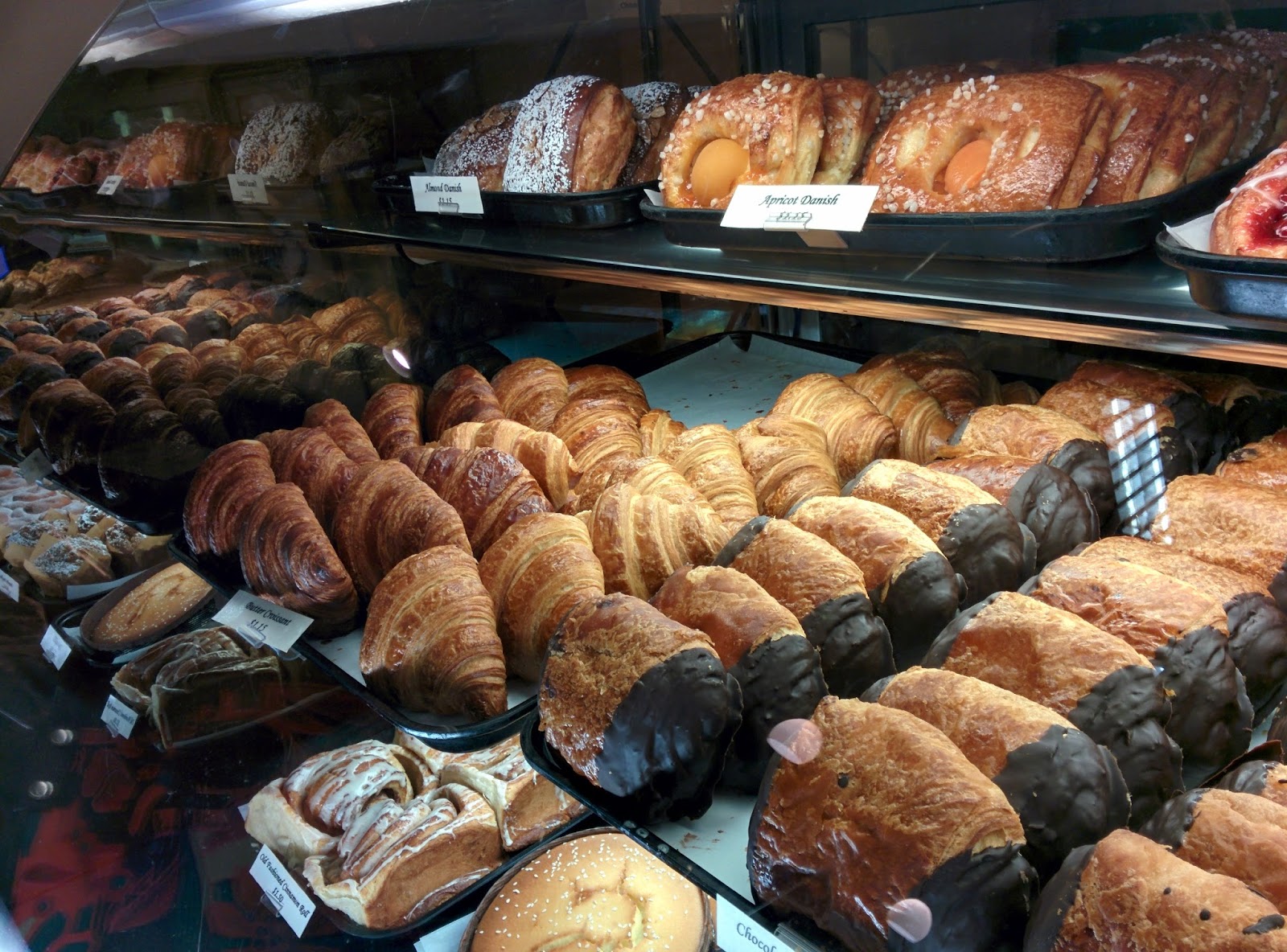 Porto's is a Cuban bakery with several locations in Southern California that has become a place where my family stocks up on snacks for the long drive back to the Bay Area. If you've never been here, I highly recommend them for their array of delicious yet affordable baked goods! My personal favorites are the guava cheese rolls, potato balls, and Dulce de leche kisses. If possible, go early in the morning because there is always a long line!

As usual, I was saddened to leave Disneyland and return to the real world. However, I know that this time I'll be back much sooner than later because I am now a season pass holder, just in time for Disneyland's 60th Anniversary! Looking forward to many more trips, happy memories, and food tastings this year!
California Adventure Disney Disneyland food product reviews travel