This past weekend, I returned from a road trip to Comic-Con and the Southwest United States. While I'm sad that it's over and exhausted from all the driving, I'm thankful to have been able to take this vacation and am already planning my next one! Over the next few weeks, I'll be recapping my trip, starting with San Diego Comic-Con! 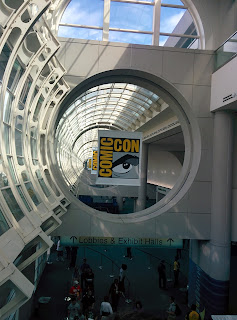 After months of anticipation and excitement, it was now time for one of my favorite weekends of the year: Comic-Con 2015!!! As veteran attendees are well aware, attending Comic-Con takes luck, good budgeting, lots of planning, and serious dedication. In fact, I started planning for this year's trip nearly a year ago, when I booked my hotel room (and 2 backups in case straggler friends joined me). Half a year later, I survived preregistration and ended up with a coveted 4-day pass with preview night. I consider myself extremely lucky and hope that this luck continues in future years.

My trip to Comic-Con started on the morning of Preview Night when I loaded up my rental car and left my house at 5am for the 8 hour drive to San Diego. Overall, it was a fairly smooth ride minus the traffic, construction, and aggressive drivers in Los Angeles. I've heard horror stories about driving in LA but didn't believe them until I was cut off and nearly struck by a Mercedes with a license plate that read "ACT FAST". Not okay!

Despite some Southern California traffic, I managed to make it to San Diego by 1:30pm. After refilling the rental car with gas, checking into my hotel, and returning the rental car, I boarded the shuttle bus for San Diego's Gaslamp District.

This year was my first year staying outside of the Gaslamp District. While I missed the proximity to the convention center and the action, the frequent shuttle bus pickups seemed to mitigate that. It also helped that I was paying less for my private hotel room than any Gaslamp hostel shared with 3-5 strangers.

My first order of business was going to the volunteer station at the Marriott Hotel to pick up a volunteer badge and my swag bag for the weekend. This year was my 2nd year volunteering for Comic-Con, which allows me to see the inner workings of the convention. Another perk of volunteering is that you get a free pass for each day you volunteer at least three hours, something I will take advantage of in the event of a sell-out during future Comic-Con badge sales.

Next, I made my way over to Sails Pavilion inside the main convention center to pick up my paid badge, then wandered around 5th Avenue collecting free stuff. I lucked our early as I ended up with some fun swag from Sharknado 3. Later, I joined the sea of people waiting for Preview Night to start. Surprisingly, they opened the doors 30 minutes early!

After the mad rush for swag, I spent the rest of the evening wandering the exhibit hall. Due to its massive size, it's impossible to see everything in one day!  After having tacos for dinner from Valentines, I hopped the shuttle and turned in for the evening!

After scarfing down a free hotel breakfast of waffles, eggs, and sausage it was time to hop on board the shuttle for Comic-Con Day Two! Today, my plan was to focus on the off-site activities.

My first stop was the Petco Fun Zone, which had a number of interactive exhibits including a virtual reality film screening, Snoopy Dog House, and drop tower ride. I didn't stay too long, but managed to get free sunglasses and some samples of pizza bites before I left.

My next stop was Adult Swim on the Green, which was basically a midway with a bunch of carnival games like ring toss, skeeball, and plinko. As much as I love carnival games, I hate having to pay to play, so I was definitely a fan of free games with prizes. In fact, I ended up getting a grand prize in the plinko game which I traded in for an Adult Swim water bottle. As much as I wanted a giant stuffed animal, I knew I was driving to Louisiana after this and didn't want to take up all the car space this early into my trip!

Afterwards, I walked along the waterfront, passing thousands of people who were camped out to watch the next day's Hall H panels, headlined by The Walking Dead, Game of Thrones, and Star Wars. After swinging by a waterfront exhibit of drones you can now purchase, I walked past another group of  hundreds of people in line for a Lego raffle.

Eventually, I made it to the Marriott Hotel and checked out the Nintendo Lounge, which had video game demos and places where people could rest and play on their handheld devices.

Upon leaving the Nintendo Lounge, I wandered around the Gaslamp for a while then ducked into La Fiesta on 5th Avenue, which had decent happy hour specials for margaritas and carne asada fries. I was treated to one of the best strawberry margaritas I've ever tasted.

Next, I made my way to Nerd HQ, which is a small, free convention that runs in conjunction with Comic-Con. After playing some games and checking out the video game demos, it was back to wandering the streets of San Diego and an ice cream snack!

While wandering the Gaslamp, I ran into promoters for the show "Vikings", who were giving away plastic drinking horns that get you discounts at different restaurants. After finding a restaurant that offered more than just Budweiser or Coors, I had a dinner of 50 cent chicken wings and a half-priced pint of beer at Eat Village Tavern + Bowl prior to hopping the shuttle to the hotel.

Knowing that I virtually had no chance of making it into Hall H without camping out overnight, I slept in and spent the morning exploring the exhibit hall and a "Fear the Walking Dead" exhibit at the nearby Hilton Hotel. Not wanting to miss the Marvel TV panels, I made my way to Ballroom 20 an hour and a half early and caught the latter end of "The 100" panel and "The Minority Report" panel (which treated us to a showing of the first 20 minutes of the pilot episode).

Next were the panels for "Agent Carter" and "Agents of S.H.I.E.L.D."! While we didn't get any free swag or exclusive previews (since they haven't started filming this season yet), it was great to see the cast interact with each other and tease possible spoilers!

After a disappointingly small happy hour/dinner at a downtown tapas restaurant, I went over to the hospitality suite in the Manchester Grand Hyatt. Here, I was treated to free chips, garlic dip, vegetables, candy, and soda!

Later, I walked over to the Midway Museum for a free party hosted by CraveOnline. I'm not a big fan of partying, dancing, and paying full price for drinks, so I pretty much just checked out the museum and left. It's not every day you're allowed aboard a carrier vessel!

Today was the day I designated as my volunteer day so I could be guaranteed a spot on next year's volunteer list. After checking in for my shift, I was sent to a room filled with volunteers to await assignment. Later, I was sent to another part of the convention center as "standby" in case my services were needed. In the end, I wasn't needed and completed my volunteer shift without having to do much. Not too shabby for a free day at Comic-Con!

After wandering the exhibit hall and grabbing more swag, I went to Lou and Mickey's to grab a free drink for downloading the Webtoons app. Afterwards was happy hour dinner at the Coyote Ugly. Next was the LA Digital Party at the Altitude Sky Lounge.

Thanks to some luck and persistence, I managed to get into a William Shatner event at a Gaslamp art gallery! While I wasn't able to talk to him or get autographs, it was worth it being in the same room as him. For those of you who don't already know, I'm an avid Star Trek fan and actually cosplayed in a TOS uniform!

Saturday night of Comic-Con is when the Masquerade takes place, showcasing the best cosplays made by people all over the world. While many people crammed into Ballroom 20 to watch the event, I opted for the live stream from Sails Pavilion. Influencing my decision was that the Sails Pavilion showing had free food, including fancy cupcakes!

Day four is typically my least favorite day of Comic-Con. By then, most of the main events are over and everyone is packing up to leave. I pretty much spent the day wandering the exhibit hall and grabbing last minute freebies from vendors clearing stock.

Unlike previous years, I left the exhibit hall an hour early. This was to stake out a window spot at Dublin Square Irish Pub for happy hour and watch the massive exodus of people once Comic-Con ended.

As down as I get when Comic-Con ends, this year's sadness was tempered by the fact that I was headed to New Orleans next! Additionally, the end of Comic-Con 2015 means that it's time to plan Comic-Con 2016! As of now, I've managed to book lodging for next year and am actively looking for better deals. The planning and anticipation are half the fun! 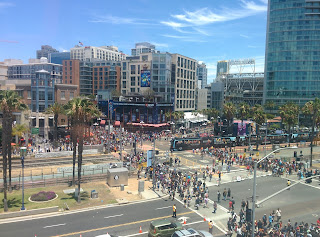