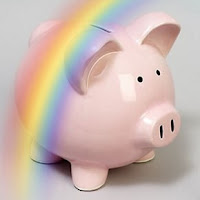 Welcome to the 21st century, America.

Last Friday, the U.S. Supreme Court ruled in a 5-to-4 vote that the Constitution guarantees a right to same sex marriage. In the words of Justice Anthony Kennedy, "No union is more profound than marriage, for it embodies the highest ideals of love, fidelity, devotion, sacrifice and family. In forming a marital union, two people become something greater than once they were." While I'm somewhat disturbed that the ability to determine a group's rights hinged on a single vote, I'm pleased with the final result.

It's been a long road to finally get same sex couples the rights they deserve. In 2008, I took to the streets to protest when California voters legalized discrimination by passing Proposition 8. Four years later, a U.S. appeals court ruled Proposition 8 unconstitutional ultimately leading to the issue being sent to the U.S. Supreme Court for a final decision. Hard to believe that it's been 7 years, but in this country change is slow.

While we've finally eradicated this dark mark of legalized discrimination against same sex couples, the battle is not over yet. Since Friday's ruling, I've observed numerous individuals (mostly religious) around me and on social media express disagreement with the ruling, along with derogatory and stereotypical statements about LGBTs in general. Additionally, certain states and counties have already made efforts to deny marriage licenses to same sex couples (though I'm sure their efforts will be futile).

As a social worker, I have to be understanding of others' cultural and religious beliefs. However, I struggle when those belief systems involve supporting legislation that segregates and treats certain populations as sub-human. My hope is that with further education, these people will open their eyes and realize that we are all humans and hence should be treated with dignity and granted the same rights.

Congratulations, America! You did well this time!
news social work