- June 03, 2015
I usually spend the week after Clockwork Alchemy and Fanime generally feeling down and in the dumps because one of my favorite annual events is done. This year, I decided to temper that sadness by taking a short trip to Disneyland before Generation Beauty! With Disneyland celebrating their 60th Anniversary, I was excited to view the decorations, watch the new shows, and taste more food!

*NOTE* ANNUAL PASS HOLDERS: Don't forget to show your annual pass for an extra 10-15% off! Might not seem much, but that savings can at least knock off taxes!

After a long Megabus ride to Anaheim, it was time for a late lunch/early dinner. Having perused multiple blogs discussing Disneyland food and read rave reviews, I opted for the fried chicken served by Disneyland's Plaza Inn on Main Street.

For $14.99 you get three pieces of chicken (wing, thigh, and breast), green beans, mashed potatoes and gravy, and a biscuit. Drinks are extra, so I just had a glass of water. Honey for the biscuits can be found in the condiments section past the cash register. 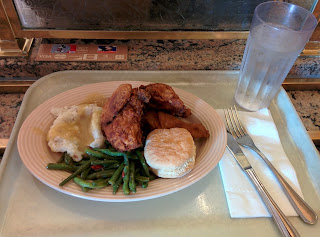 In all honesty, the green beans and mashed potatoes reminded me of standard hospital cafeteria food and were forgettable. The biscuit was somewhat dry, and would have been better if I found the honey before I finished my meal. The chicken, however, was cooked just how I liked it, with lots of very crispy skin (my favorite part) and juicy meat. While not the best fried chicken I've ever had, I left Plaza Inn feeling satisfied with my meal and quite stuffed. Given the large serving (as it should be for $14.99), I'd bring a friend, order dessert, and split the fried chicken platter next time.

This beverage is essentially a frozen pink lemonade with whipped cream and a hard candy honey stick. Frozen blended lemonade is one of my favorite forms of hydration at Disney (next to the Dole Pineapple float), so this drink did not disappoint. My favorite part is actually the honey stick, which unfortunately only extends about an inch into the whipped cream. The next time I order this drink, I may have to beg the staff for extras! Disney, if you're reading this, please sell those honey sticks individually because they are delicious!

The worst part of this drink is the $5.99 price tag. If you don't care for the honey stick or whipped cream, there are definitely cheaper frozen lemonade options in the park.

After a magnificent fireworks show commemorating Disneyland's 60th Anniversary, it was time for a late night snack before heading out for the day. Having read many reviews about the Matterhorn Macaroon, I decided to head to Disneyland's Carnation Cafe on Main Street try the cookie. Since it was starting to get chilly outside, I also got a cup of Abuelita Mexican hot chocolate.

Not to be confused with a macaron or French macaroon, the Matterhorn Macaroon is a coconut macaroon shaped to look like the ride with its namesake! This cookie incorporates flavors and textures from both coconut and almond, and is dipped in white chocolate for an extra decadent treat. While I am normally not a fan of coconut macaroons, I loved the Matterhorn Macaroon thanks to the inclusion of almond and chocolate flavors. At $1.99, it's something I would get again!

While I typically love Abuelita, I was greatly disappointment in how the Carnation Cafe prepared this beverage. To me, the drink was watery and tasted as if the hot water pot was not fully rinsed out after being soaped. This could be due to the water quality in Southern California, or the staff actually not rinsing the hot water pot adequately after cleaning it. Don't waste your money!

Even though my parents typically bring a rice cooker and various canned meats when we go to Disneyland, I still attempt to book hotels with hot breakfasts included. Since I'm usually in a hurry to get to the park in the morning, I like the idea of not having to worry about food prep and clean-up. For this trip, I lucked out because I managed to get a heavily discounted room at a place that serves delicious hot breakfast food!

While I purchased this pretzel next to Star Tours in Disneyland's Tomorrowland, I believe there is another cart that sells them along the path leading to It's A Small World in Disneyland's Fantasyland.

Hungry for lunch, but not wanting a large meal, I headed over to California Adventure's Cozy Cone Motel in Cars Land to try out their Chili Cone [sic] Queso. For $7.49 + tax you get a large bread cone filled with beef chili topped with shredded cheddar cheese and corn chips. For those of you who don't like chili or don't want to deal with bloating issues, there's also a bacon macaroni and cheese option and a new chile verde!


The Cozy Cone Motel does a great job with their chili, and the corn chips provide added crunch and flavor. While the bread cone is generally flavorless, lacks absorbency (for good reason), and has the texture of a flattened loaf of bread, I will admit that it's leak-free and makes for a great conversation starter. Overall, the Chili Cone Queso was a satisfying meal and I look forward to trying other cones in future visits!

After finishing the Chili Cone Queso, I wanted something cold and refreshing to drink for dessert. I ordered a cup of Red's Apple Freeze, which consists of blended frozen apple juice, marshmallow syrup, and mango-passionfruit whipped cream.

On mistake I made was not stirring the marshmallow syrup into the blended frozen apple juice, as my first sip resulted in a mouth full of syrup! After mixing, the concoction tasted somewhat like frozen caramel apple cider. I didn't really care for the mango-passionfruit whipped cream, though, as it tasted like flowers to me. Not sure if I'll order this again, but I'm glad I was able to try it!

After eating so many bread and sugar-filled substances, I started craving vegetables. Hence, I headed over to Bengal Barbeque in Disneyland's Adventure to try out their Bacon-Wrapped Asparagus (I never said I wanted healthy vegetables). As I was ordering, I spoke to a cast member named Mike who commented on the greatness of my Citi Forward Credit Card (which gives you 5x reward points for restaurant purchases). If you're out there, Mike, know that you're awesome and have great taste in credit cards!

The bacon-wrapped asparagus consisted of chopped asparagus individually wrapped in bacon, grilled, and served with a lemon slice. I especially liked that they chopped the asparagus before wrapping and grilling because it makes it so much easier to eat than a whole asparagus stalk.

While I'd probably order this again, I feel like two orders are needed for an adequate meal, and I'd hesitate to pay $8.38 + tax for something I could easily make at home.

I spent a good amount of time debating whether to get the Dinoco Oil Can Sipper or Mickey Balloon Popcorn Bucket. In the end, I figured that I could actually use the sipper more often to keep water at work (and confuse/amuse my coworkers). It also helped that I'm a big fan of dinosaurs, and the brontosaurus logo looks similar to the logo on my favorite gas station. Yes, it's my favorite gas station because of the dinosaur (and the fact that the prices are typically the cheapest in my area).

After finishing up the oil, erm, root beer from my sipper, I was pretty stuffed. Hence, I spent the rest of the day watching shows and going on rides. While I wanted to try the special 60th Anniversary Chocolate Cake, I lost track of time and the restaurants closed! Will have to try again next time!

Unfortunately, I my season pass was blocked out on day 3, so I spent the morning exploring Downtown Disney before catching the bus to my friend's place. For lunch, I ordered gumbo from Ralph Brennan's Jazz Kitchen Express, the quick service version of the more expensive Ralph Brennan's Jazz Kitchen. Described on the menu as a "rich Roux-based Soup, Chicken and Andouille Sausage", I'm sure this gumbo is identical to the one served inside, except in a plastic takeout bowl at a fraction of the price. Don't forget that the Disney annual pass discount also applies to all Downtown Disney restaurants!

As usual, I was sad to leave Disneyland, especially since I am now blocked out until mid-August. However, my family (who all requested shirts) were excited to see my pictures and have every intention of making a trip to Disney before the end of this year. In fact, since coming home I've already booked a family room for November so we could see Diamond Anniversary themed Christmas decorations! I can't wait!
California Adventure Disney Disneyland food product reviews travel